Walking with Angels. Bolsena to Montefiascone

UAfter a relaxing stay with the sisters, talk about quiet, we set off at 7:15am. Unfortunately the marking out of town was nearly non existent and we retraced our steps back into town and then decided to just go ahead. Eventually we found the VF signs crossing the highway and followed them meandering through olive groves and sheep trails. The going was not difficult at all but we both found ourselves struggling after a few hours. We have decided that our bodies are just getting tired generally. Even my wrist watch is getting loose on my arm and the belt on my pants looks more like a rope than a belt. The view out over the lake is fabulous. The town appeared perched on top of the hill like so many are.
I asked a business man where the hotel Urbana is and he invited me into his office. He printed off a google map for me and we had no trouble finding the hotel. It is located within the old city on the main street and that again suits us. We went into the reception with our gear on and asked about the price and to see a room. The place is a very good three star and the rate is 70 E with breakfast which is within our price range for today. If it is a Buffett breakfast as I think it will be, we will really be chowing down since we haven't had one of those in a long time. The views over the lake from this very unique town are absolutely stunning. The fortress here had such a dominating view over the area for many miles in every direction. We are always amazed at the traffic here as one intersection has six raids coming together but somehow everyone dodges each other and the pedestrians. One of the information sign boards along the way, showed how the Roman roads were constructed. It is no wonder that they are still around while the mideaval roads were just rocks put down without the base dug out like the Roman roads were. I like the part where they left either side of the road with a gravel type of surface for the calvary and there was a raised pony type wall along either side of the flat rock road surface for the riders to get on their horses. One of the things we in North America could learn from the Italians are the greetings. We always try to address Italians with buongiorno or buonasera and in the restaurants the people coming in and leaving, address the others with an appropriate greeting.
We did just that when people came into the restaurant tonight and when we were leaving, it made us feel less like a foreigner. The restaurant Borgo Antico just down the street from the hotel Urbano gave us a pilgrim meal with three courses, wine and water for 14 E each and it was very good food. Just once I want to say, with gas, when asked in the restaurant if we want water with gas or no gas.
I see a real opening for an Italian with an enterprising spirit who wants to make a few dollars. Go into the toilet seat repair/replacement business. We have yet to find a toilet seat, other than the hotel we are now in, that raises and lowers without one side giving way. Perhaps they are worn out from so many uses without someone tightening them up. The other suggestion I would have for an enterpriser is headlight and running light replacement in automobiles. Having seen so many Fiats bearing down on us with only one headlight or running light, I can assure you there is money to be made. C said tonight when we were discussing the pilgrimage, that if she knew before just how tough it is, she might not have agreed to do it. We have a saying, we aren't 70 anymore.
As we were walking along we saw what looked like a herd of dogs coming towards us. It turned out to be a bird hunter with his gun over his shoulder and his four dogs all harnessed together in a gaggle walking sideways. 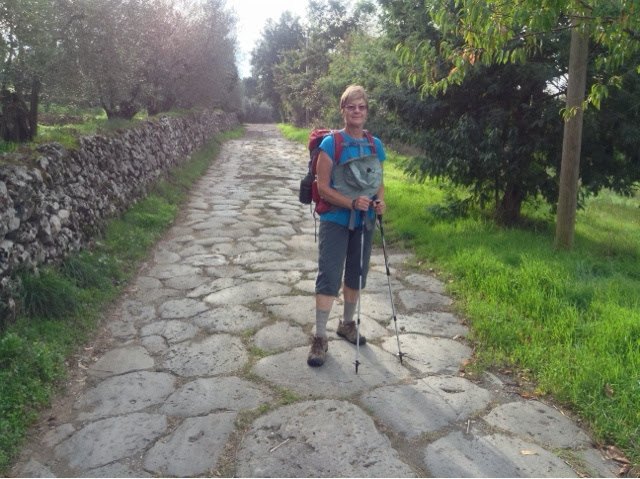 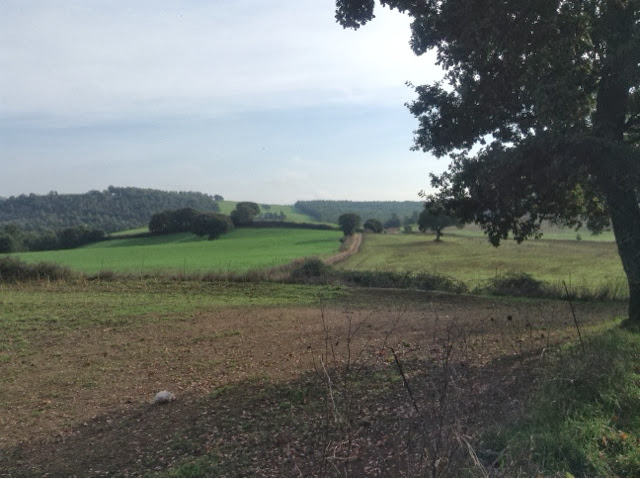 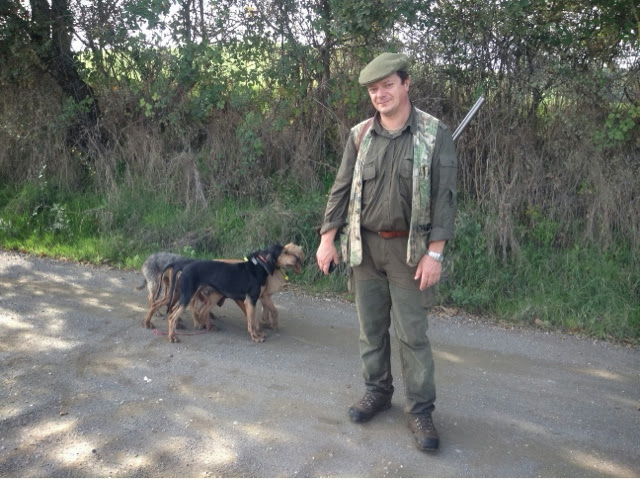 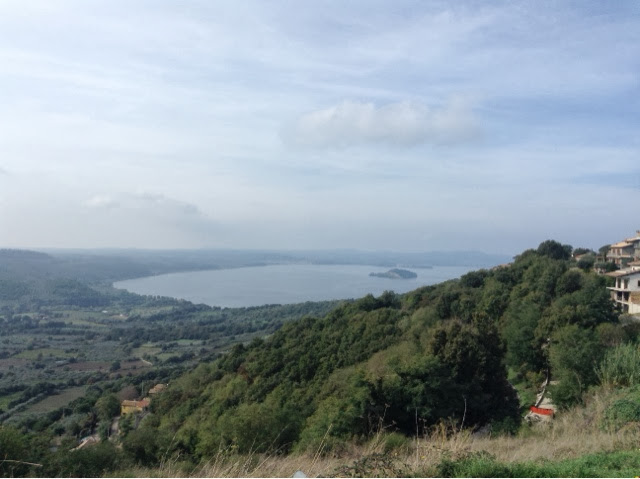 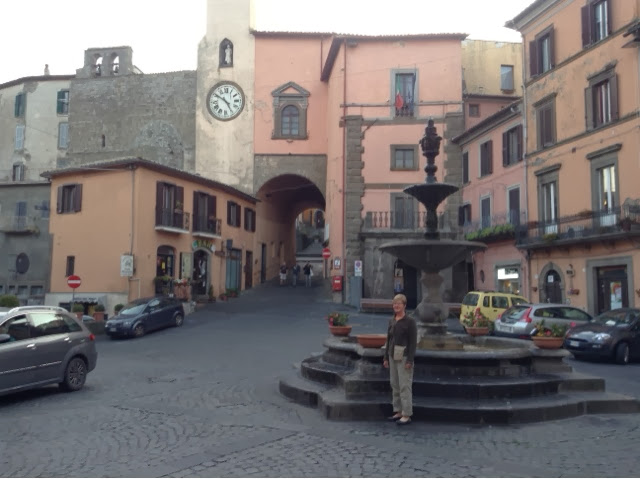 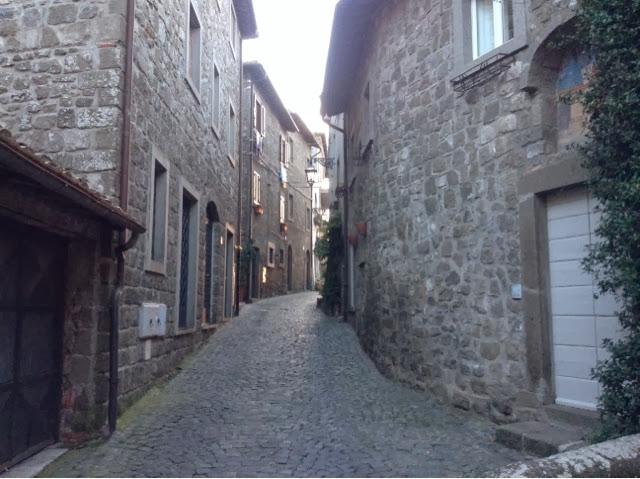 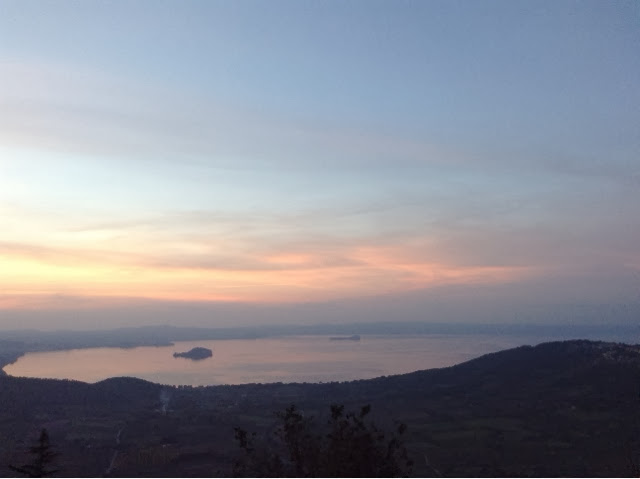 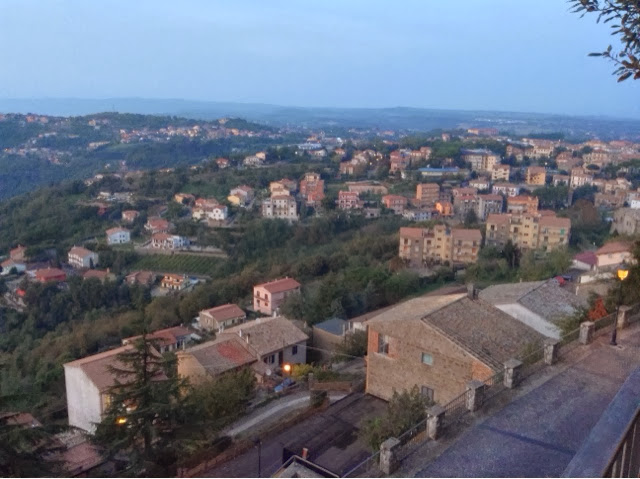 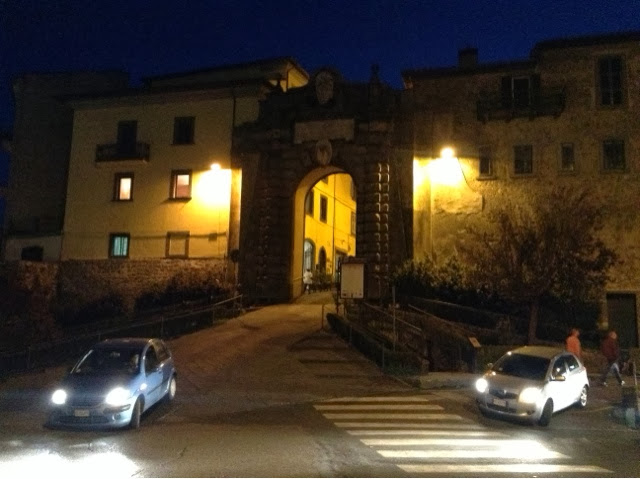