Oh no, they're bringing another dish. What is that under their table? Ollie's bride brought out the fettuccine nicely dried and asked how much we wanted. The answer, grande. What we didn't know was how many dishes they were going to bring. First was a nice cold glass of beer. The first dish was a rice dish with chicken, then came the pasta with tomato sauce, then came the cold roast pork, then came the mushrooms, carrots and squash. By this time we are both in pain from over eating. Before going back to the icebox we have a quick game of crib. As we were leaving we noticed something under the next table and it is moving. Over to Ollie's at 7am for breakfast just as the rain started. We were on the road with our ponchos but the rain remained light. After awhile we took our ponchos off and walked in the mist. Then we were walking through a path where the soil had washed down from the rain. We were in deep mud and having to be careful it didn't knock us over when we walked. It built up under our shoes and on the end of the poles. What a mess. Our rain pants were all mud as well. After we were off the mud tracks we were up and down the hills. In one town we went in to the grocery and sat outside eating cherry tomatoes, cheese and crackers as the people walked by. In another town we passed a gelato shop and went in and had frozen yogurt that cheered us up. We were passing a corner about 4 kilometres from our destination, when we heard a shout. Someone with a pack on was pointing the other way and telling us to go the other way. When we got over there he said that the way he had just come from is better. We didn't get his name but we took his picture with Charlotte. He has started in 2012 from Santiago Spain and walked to Rome. Then he walked on to Jerusalem. Then he walked back to Rome and is on his way back to Santiago Spain. He looked about 150 pounds and his pack weighed 25 kilos. We had a stream or two to go over today but it went fairly well. When we arrived at our accomodation, we asked a female passing by about it and she pressed some buzzers and got the priest to come. He showed us to a dorm type room and went and gift yes sheets and blankets. We are waiting for Danielle to come. She is the woman we phoned the day before .We came across a mail box along the trail in the middle of nowhere. Charlotte opened up the door and there inside was a book where pilgrims passing by had signed, telling where they were from and the date. Our room in the old building was cold when we first got here but then the sun came out and we opened the windows to let some fresh air in. We played crib with the cards we bought from Ollie yesterday. The Signora who runs the drop in/ rec centre below, told us to come at 7pm for supper.
We showed up and she brought a jug of wine and a plate if gnocchi. It was good and we were hungry. We kept asking ourselves, she won't bring more of something when this is done. We didn't think so.
Then, out she came with a large plate of ham and fresco fromagio, sheep cheese and I don't know what all. Then came the plate of vegetables. Oh my, shades of last night. We are really full and when I go to pay, she says $24E. What a bargain. It is always good if we leave it up to them to cook the local specialities. Everyone here has made us feel very welcome and helped us. 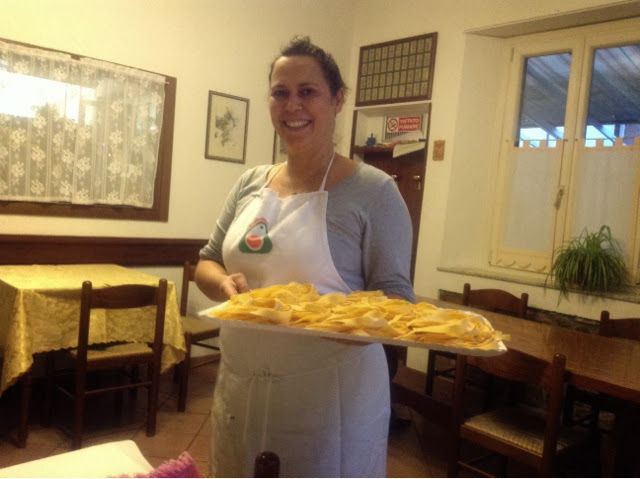 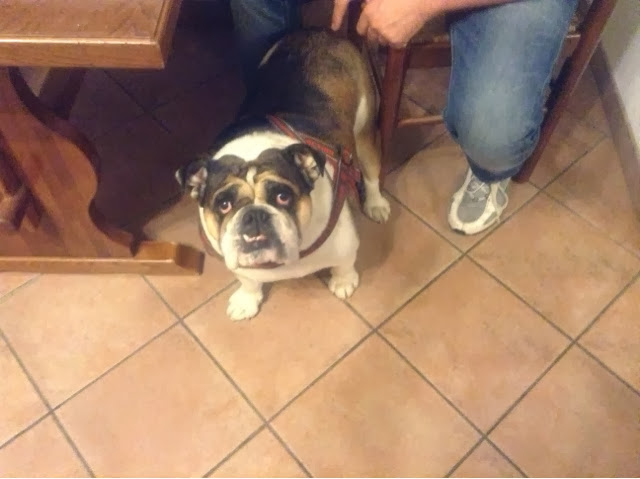 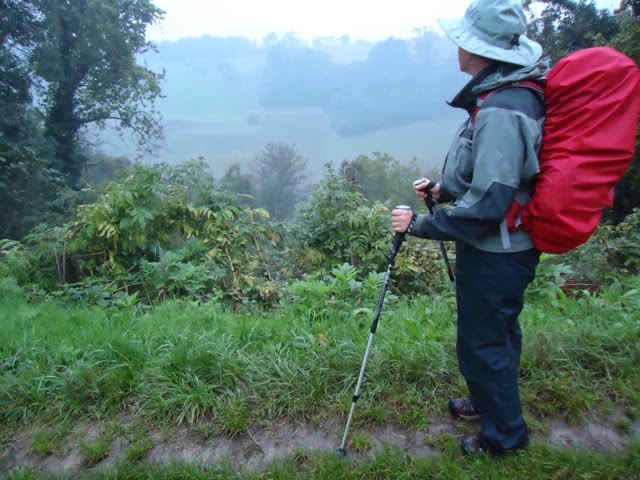 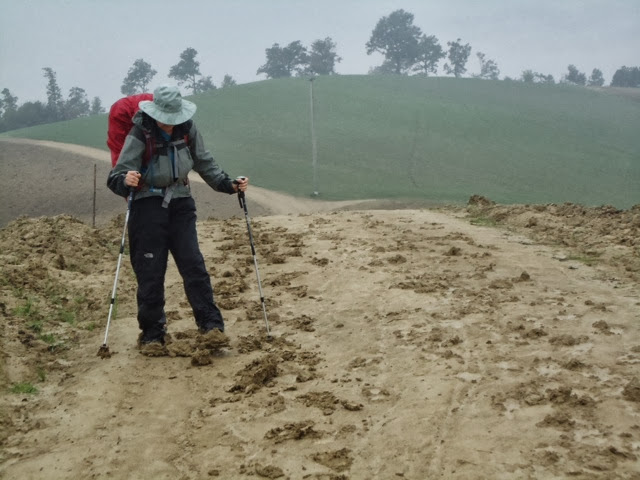 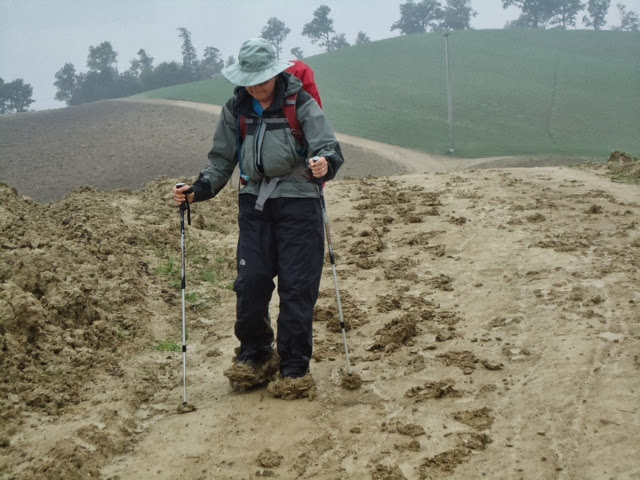 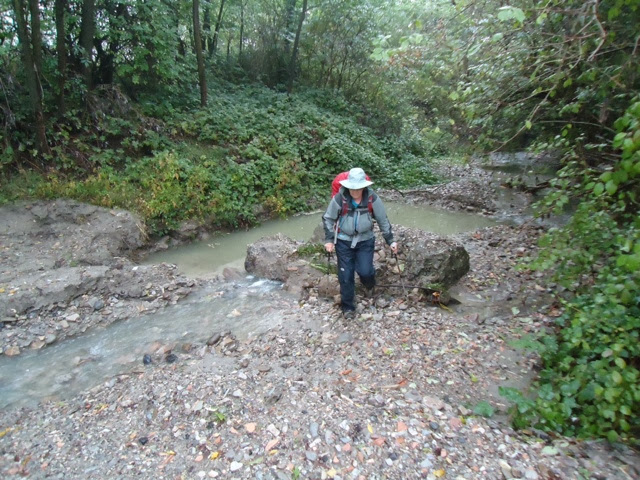 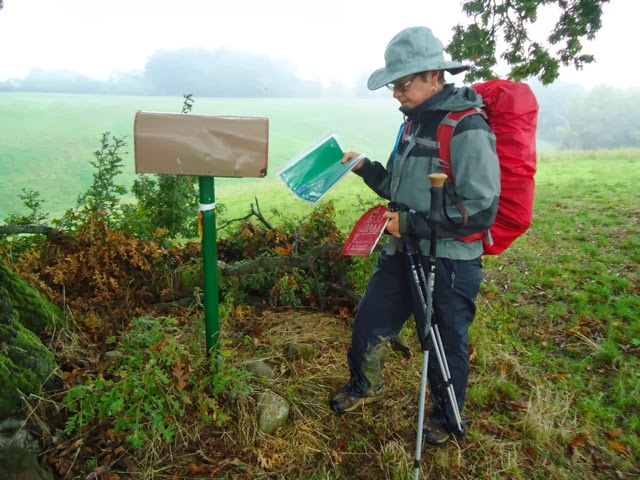 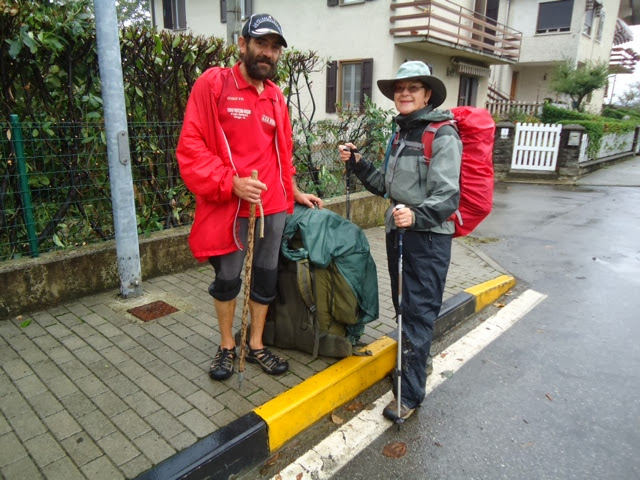 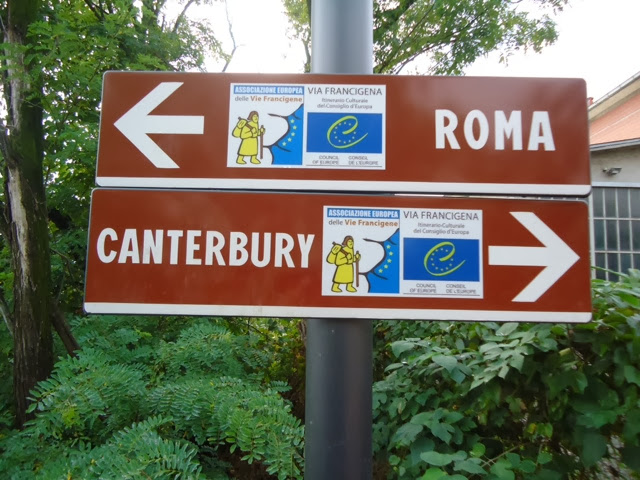 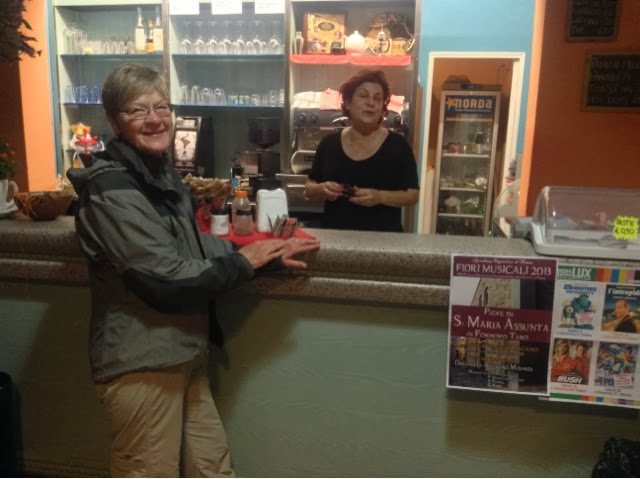