Walking with Angels. Sienna to Ponte-d'Arbia

Where does one start when you have had the day we have but are now snug in a nice ensuite room.
We enjoyed our meal with three of pilgrims, sister and three other ladies. I guess it was leftovers and day old stuff but the roast pork was terrific. The conversation was in Spanish, Italian, French and a little English. The pilgrim lady walking by herself is from Belgium and seems to to be able to converse in all the languages. Only when you travel do you see the advantage of being able to converse in other languages.
We were down having our usual yogurt etc breakfast by about 6:45am and out if the building by 7am. With 28 kilometres to go we wanted and early start. Stopped by the bakery for croissants etc. It looked like we were in for a nice day and although we didn't know it at the time, one of our best weather days in weeks. Around noon the temperature seemed to be in the middle twenties C. We seemed to have left that really terrific Tuscany scenery where it was a picture around every corner. This seems like more agricultural although it still has the rolling hills. After all the rain we had during this week we walked through more mud today. The water wasn't over the boots but there were times when the mud was. C seems to have taken a walking position twenty metres behind me so that I can concentrate on the VF indicators and she can verify them. Going through some especially deep mud I heard a voice from behind saying, oh no. The mud had gone over the top of her boots. We finally arrived in Ponte de Arbia
at 2pm. We located our dormitory accomodations which is an old hospital building, right after we crossed the bridge. Flooding evidence was everywhere. Men walking around in rubber boots covered with mud. Trees along the wide river bank had collapsed into the river. We rang the doorbell of the building a number of times with no result. Finally I asked one if the workmen and he told us something in Italian. Finally C got one of them and he took us across the street to see someone over there. This big guy comes out with his belt undone and he is busy talking to someone else. We wait and wait, finally he motions for us to follow him. Over to the old hospital building we go. It is looking rather nasty at the door and I think I heard him referring to the acqua and pointing to the building. Well the main floor inside is full of river silt. The kitchen with its stove etc is not livable. He takes us upstairs and show us to a room with two or three beds. C is on to any bed issues immediately and let's me know that there are no sheets. The plumbing works and there is electricity. He must have guessed by the look on our faces that this isn't going to work. Then he says, he has a room, pointing across the street, that we
can have for 40E. He said the magic number and we file out across the road to his other enterprise. This looks like his house but there is a sign in the window that says, rooms. As soon as we get to the door, he yells for his wife. Big mistake. She lights into him and they have a yelling match all the while we are standing there not understanding a word, but we know she is not happy. Then he says to us, an emergency. I said to him, problema? He shows us into the lower level of the house and into our bedroom. He brings us towels and says we should sleep. Then he says the Pizzaeria has been closed but it opens today at 7pm. You guessed it. He owns the Pizzareria too. There are a dozen guys all covered in mud standing around a gas generator that is running right outside our window. The building we are in stands out over the river and the destruction of the river bank is easy to see. Worked on C's heel blisters by draining and leaving the thread in covered by a bandaid. The Pizzaeria was not too bad. The soup, barley and bean was pretty good. Oh my, 30k for tomorrow and apparently mostly up hill. We are now counting the days to Rome, 10 left. 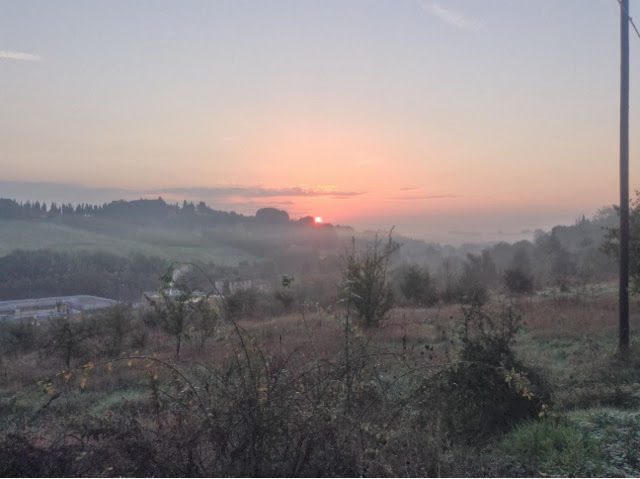 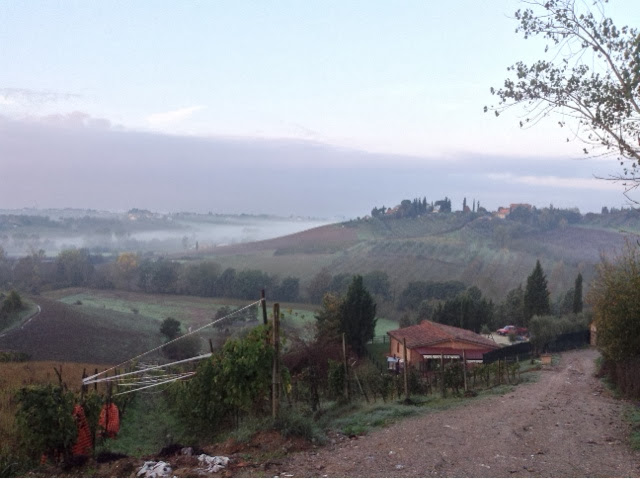 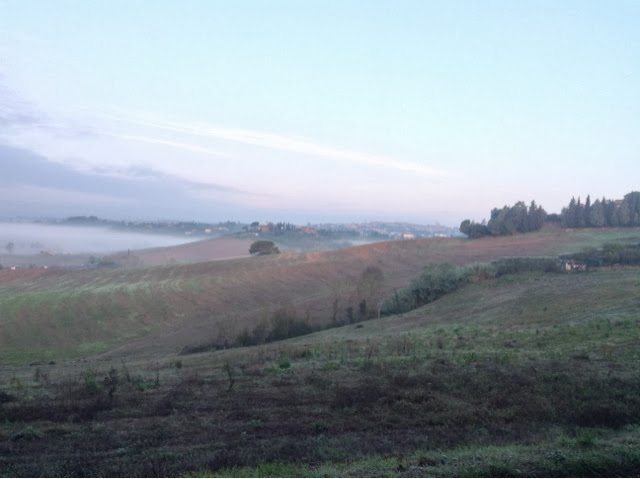 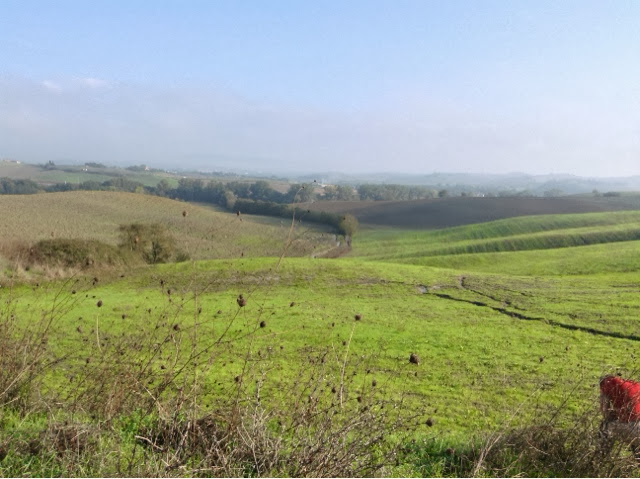 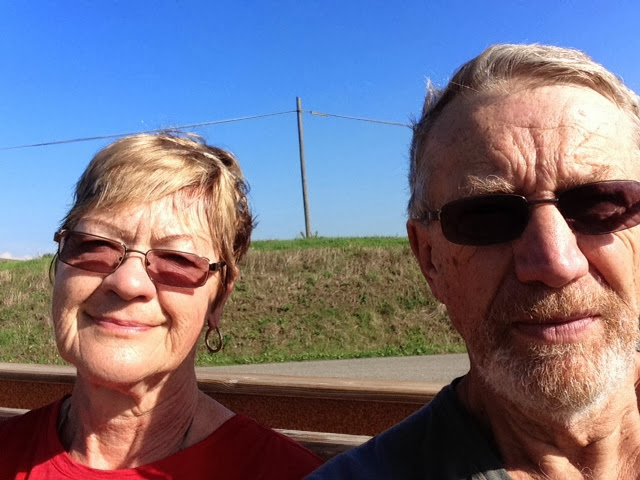 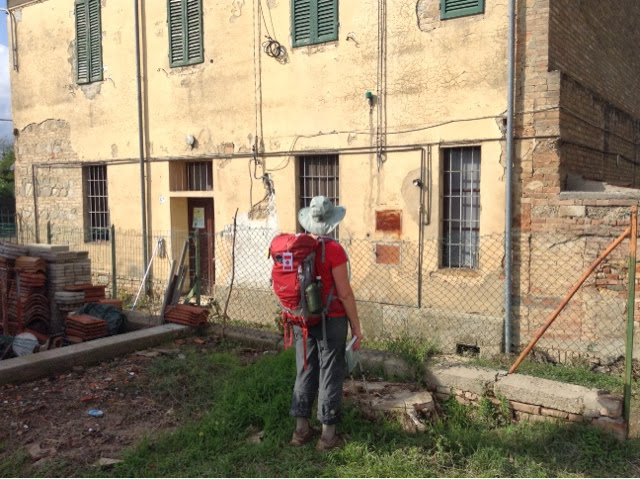 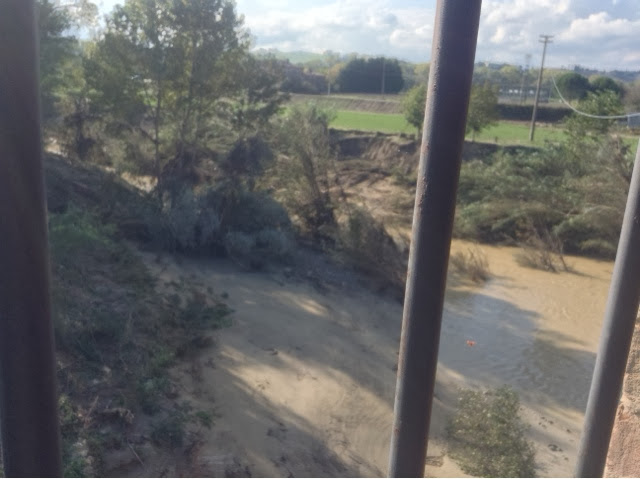 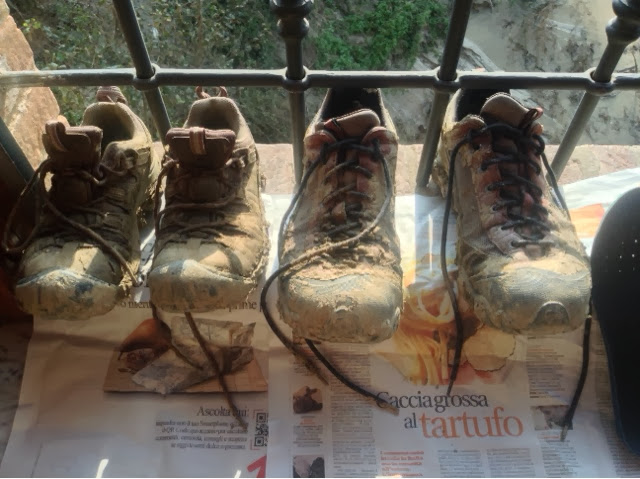