Went out for supper tonight at a little place with a sign board that says two courses for 11E. It was in plastic dishes and plastic wine cup but it was fine. Had the papa pasta I call it, with meat sauce. The whole family was gathered around. There were no other customers and the children were doing their homework. The little boy who is six came over when we were leaving and said, have a good night, in English. I complimented him on his English and shook his hand. It was the older kids who took our picture with the iPad. We were down in the dinning room for breakfast at 7am. Sister was there and had a large cooking type pot on the stove with coffee in it. The bread was yesterday's and hard but the
coffee was okay. Stopped at a bakeshop on the way out of the city for lunch buns made up with ham and cheese along with croissants. The way was well marked and as usual it was up and down. We crossed three streams today. The first two were stepping stones and the last one was boots off and wading through up to the knees. We ran into an awful lot of mud from the rain storm two days before. The soil has been washed down and gathered in the low spots. It is deep and slippery making the footing very tenuous at times. We shook out our boots and socks later to get the sand out of them.
Going through a village I heard birds chirping and saw that the homeowner had attached their bird cage to the outside shutter. We came across four tourists who were out walking on the VF for just the day. We stopped at a hot springs with a few people in the water swimming. They said the water was just warm. It looked like it used to be quite a nice place but has been left to get run down looking. We arrived at our destination at 3pm. We put in about 31 kilometres in 7 1/2 hours and we were walking steady with one 15 minute break for lunch. Our room is very nice and sunny with a double bed and three singles. The 50E rate is reduced to 30E for pilgrims. It is run by the priest Don Doriano at Casa per Ferie S Maria and is kept clean, has a kitchen but with no place to buy supplies. The little store is closed today. Our window looks out on the piazza which is pretty much the whole town. The town sits on a high hill and is quite distinctive with its walls and nine towers. As pilgrims we had free access to walk the walls, saved 6 E. Looked in the tourist shops and saw that they are selling a specialty pasta. Looked in our cupboard and saw a package that a previous pilgrim had bought and left which is the same stuff. Also found some pasta sauce in fridge that is left over and tastes okay. Putting two and two together. Bought a young wine. I said to the fellow, how young is it? The answer, last year. We are having pasta and sauce with a young wine for supper in our kitchen. We are the only ones here in the whole building with four bedrooms. We are going to strip another double bed so that we have a top and bottom sheet. Most of these places only have a bottom sheet and a blanket. The tourist lady here(she is a young woman from Albania) made reservations for us for Friday, Saturday and Sunday, so that is good. Tomorrow we are staying at a place in Sienna with a woman who is known as the, mother Teresa of Sienna, sounds interesting. It's 6:30 pm and dark outside when I heard some knocking on the outside door downstairs. We had just said a few minutes ago, well I guess no one else is coming tonight. When I opened the door, a man and a woman with packs on were going back down the stairs. I motioned for them to come in. The man started to take off his pack but I said no, come upstairs. I showed them to the other big room with a double bed. They are Spanish speaking but we were both speaking the same language of unquestioned hospitality. We know what it is like when someone welcomes you after a difficult day with nowhere else to go, buon Camino. Nothing open for petite de Jeune in the morning so we ordered a ham and cheese pizza which is sitting in the box for morning. C wanted a gelato so went across the square for two hazelnut cones. Had to pierce the heal blister on C. That walking through streams has brought on heal blisters on both her feet. Hopefully they will get better. We have been told there is rain for tomorrow, oh no. 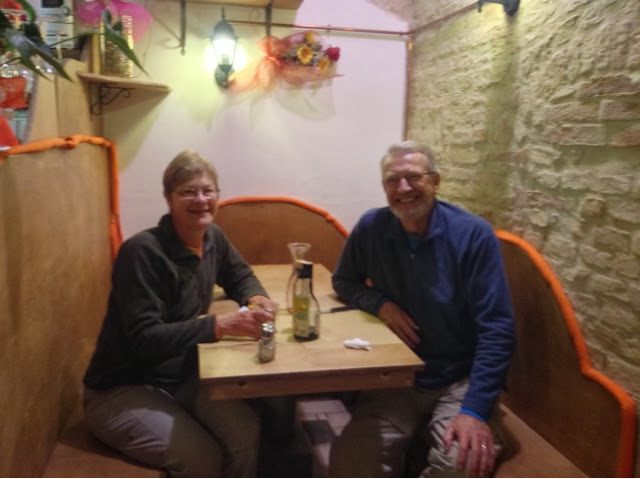 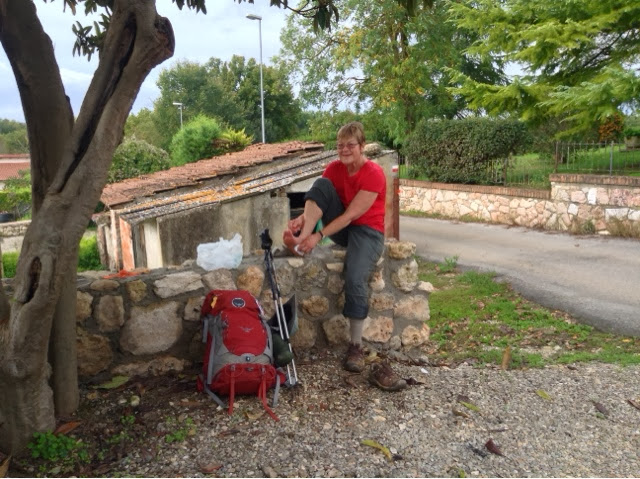 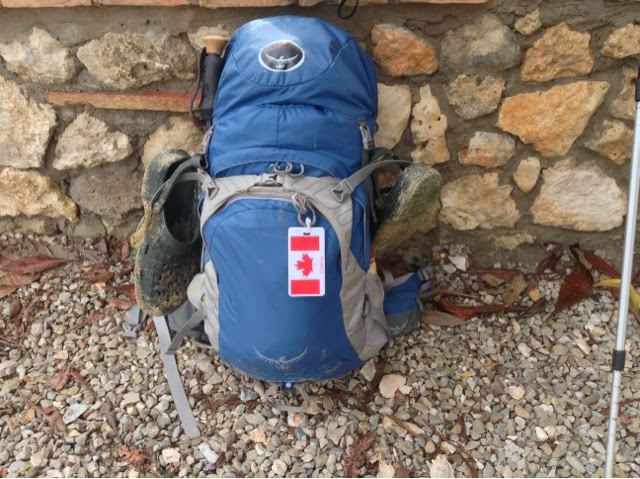 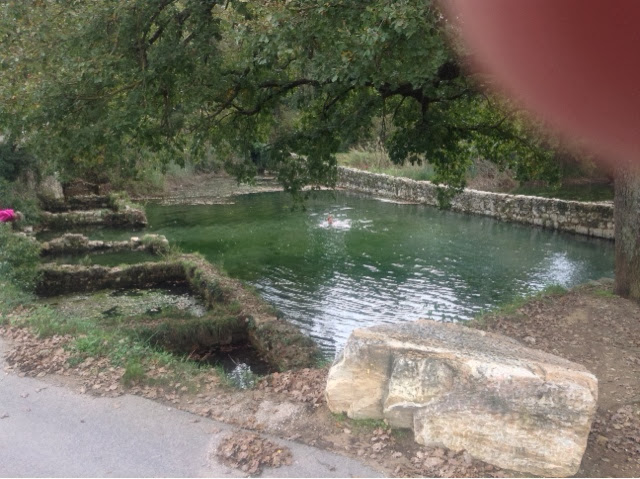 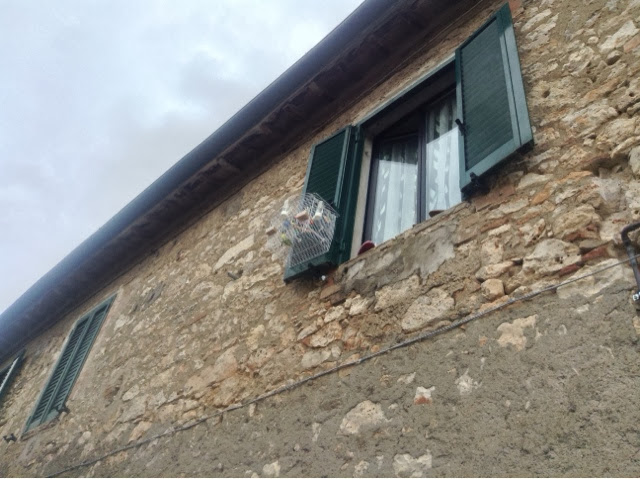 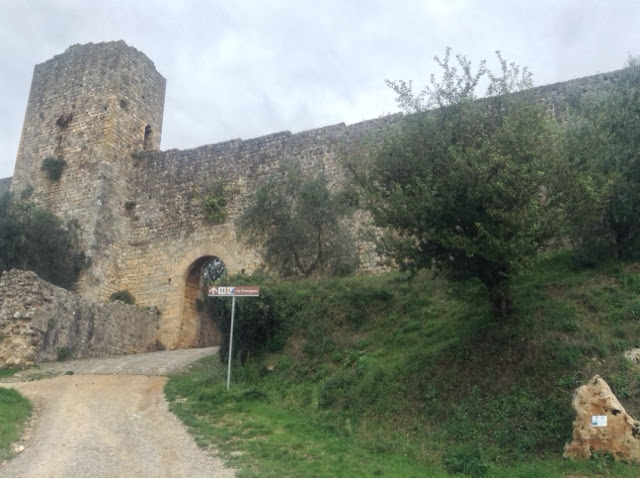 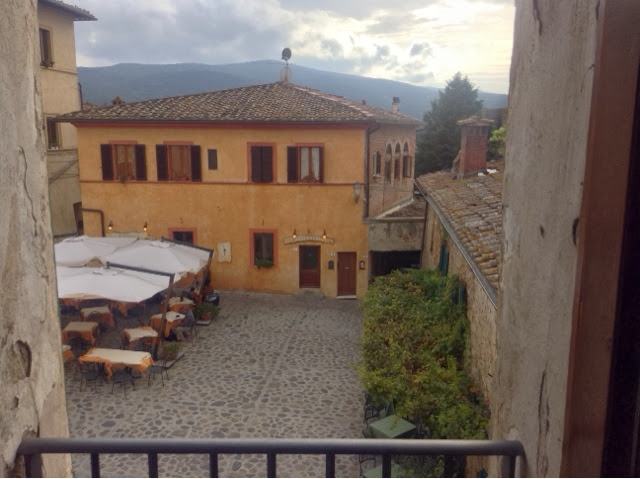 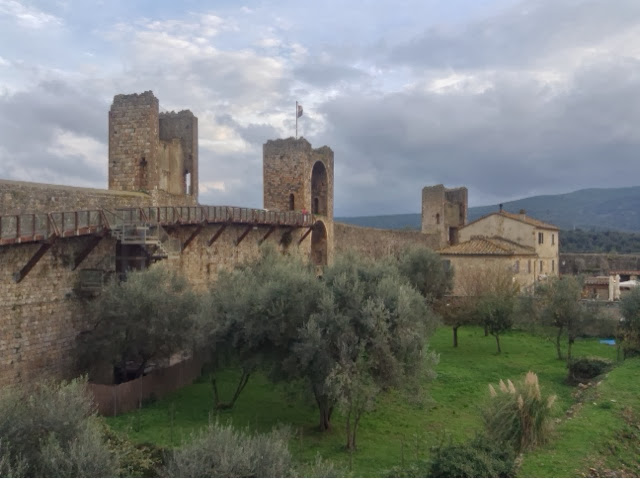 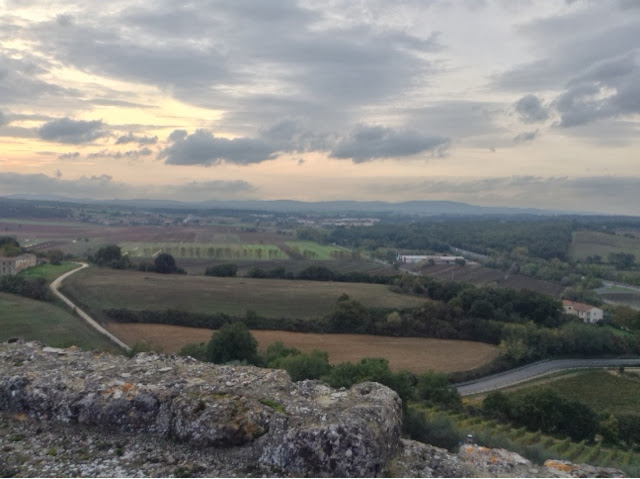 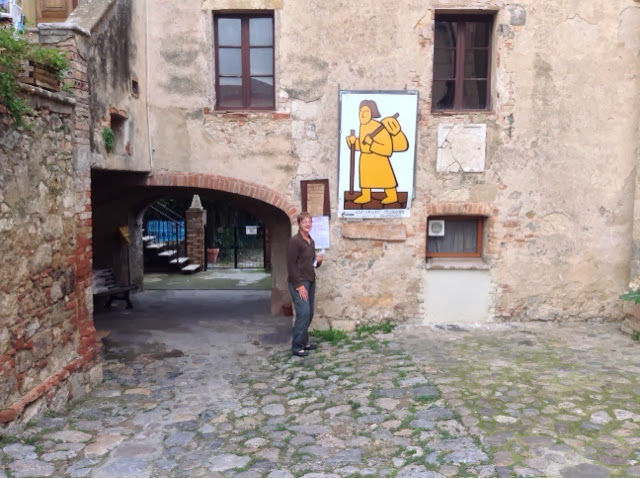 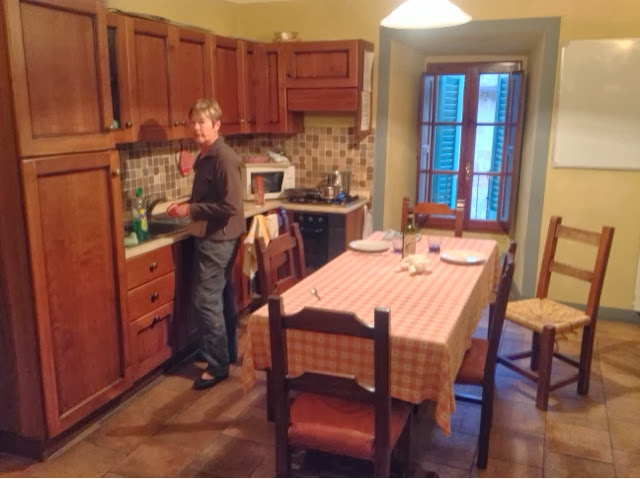